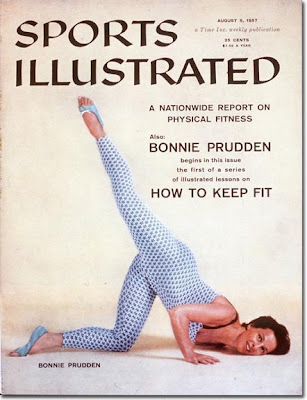 An early champion of physical fitness, Prudden was an author, instructor and entrepreneur who followed her own advice and exercised regularly until her death at 97 on Dec. 11.

Long before Michele Obama adopted her campaign against childhood obesity, Prudden had been part of a study team that documented America’s out-of-shape youth in 1955 for another president—Dwight Eisenhower. As a result of the report, Eisenhower called for the creation of “The President’s Council on
Youth Fitness.”

The woman who, with her husband, climbed the Matterhorn on her honeymoon was one of the first fitness instructors with a national presence on TV. An author of 15 books, Prudden developed exercise classes for babies, the blind , those who wanted to improve their sex lives or prevent incontinence. She invented exercise equipment, rock walls and a line of fitness apparel. That’s a full-body leotard of her design that Prudden is wearing on the cover of Sports Illustration.

Despite a broken pelvis in her 20s and a triple bypass in her 90s, she never stopped working out. “ You can’t run back the clock,” Prudden said, “But you can rewind it.
Posted by Caryl 3 comments:

Email ThisBlogThis!Share to TwitterShare to FacebookShare to Pinterest
Labels: A Life Well-Lived, HealthBeauty 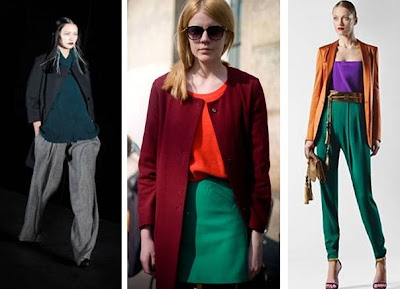 As we move further into the Fall/Winter season, I’ve been noticing another fashion trend that is bold and eye-catching and yet easy to pull off. It’s referred to as color blocking. Actually there’s two looks I’ve been coveting; the other is pattern-mixing. It intrigues me and it can work with the right patterns but takes a lot of time and practice. If your ensemble hasn’t been thought out beforehand, it could be too much to subject yourself to if you dress on the go as I do. (Although I thought I was successful teaming up a floral blouse with a brown pinstripe pant but that’s as far as I got.)

Back to color blocking, which is much more effortless and a relief from the total black silhouette that has predominated the fashion scene for so long. It simply means the wearing of three or more clothing and/or accessory items of separate and different solid colors at one time. I believe it’s creative source was Piet Mondrian’s abstract paintings of colored squares, rectangles and thick black lines. Yves Saint Laurent used these as inspiration for his 1965 Mondrian day dress. There’s been a few designers this season mimicking that look as well. And J Crew has been long known for its unusual mixing of colors with its latest catalog and web site chock full of these chromatic ideas. 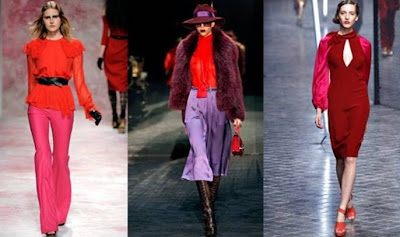 A dress, jacket or sweater may be a design of two or more colors itself making color blocking easy to pull off. I remember I once made a dress where the sleeves, bodice and skirt were each a different hue. (I was so ahead of my time!!) But if you want to really dive into the trend, you can start off easy by choosing from a family of analogous colors (per the color wheel) or by simply introducing a third color with an accessory like a belt or handbag, a bold piece of jewelry or even hosiery. I recently wore burgundy tights with my teal dress and carried a purple handbag. A teal skirt with a navy blouse and sweater coat was so easy I added a red purse. I was so comfortable with that the next time I swapped out the navy blouse for a salmon colored one. I feel I’m on my way now.

Give it a try. It’s actually fun and an easy way to be a trend setter and look like you know what you’re doing on the fashion front. Start with accessories first and then analogous colors. Be brave and move to complimentary colors. Mix some orange with blue, some green with red and no black or white please. They’re not colors!

Posted by Maryl No comments:

Caryl says: It's beginning to look a little like Christmas 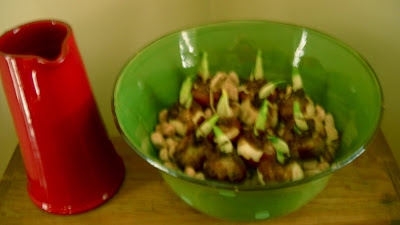 My garden is dormant. The Christmas tree awaits being cut until closer to The Day. So this weekend I went to The Phantom Gardener in the Hudson Valley to buy some holidays bulbs to cheer up the house and my pre-winter solstice blues. I bought a bunch of paper whites and three amaryllis bulbs in white, light pink, and wine rose. Planting them and watching them grow is sort of like having a living advent calendar (without the chocolate treats behind each door my children adored.) First I put eleven of the dozen paper whites in a Le Fanion polka-dotted green bowl filled with stones. (The red pitcher, which I plan to fill with ivy from my garden or boxwood mixed with lilies in a couple of weeks, is also from the same charming French store in Greenwich Village.) 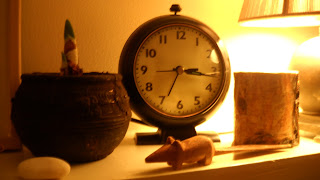 I had one paper white bulb that wouldn't fit so I stuck it an unpolished brass bowl I had bought last spring in Orissa, India. All the other items the man was selling in a remote tribal village were shiny and bright but this one was dark with age and inattention. It was made by his grandfather, he told me. Now this bowl from a century ago and a half a world away gives me immeasurable pleasure sitting atop my fireplace mantle while I await its fragrant blossom. 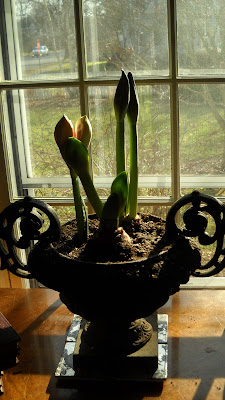 Finally, I found an empty urn on the patio outside that my former boyfriend left when he moved back to the city and broke my heart. (There's some symbolism in the urn, no? ) I've always liked the lines of it, and the amaryllis and the abandoned vase seem happily at home atop the hope chest that had belonged to my ex-husband's mother (Is this some kind of memorial to dead love?) I suspect the many-hued amaryllis flowers will be glorious come Christmas--and my scarred heart filled with the joy that accompanies this time of year. After all, tis the season to be. . . and all that.

Posted by Caryl No comments:

Email ThisBlogThis!Share to TwitterShare to FacebookShare to Pinterest
Labels: HomeGarden

Caryl wonders: What Makes a Book Worth Reading? 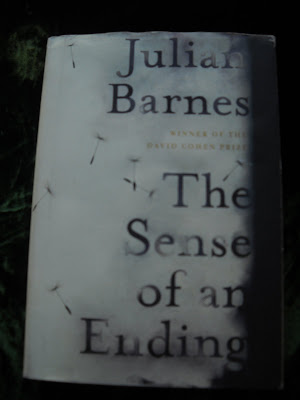 Lately, I have been stalled in my reading. Mostly because I am reading everybody else's recommendations. (Right now, my new book club's choice--Alice Hoffman's The Dovekeepers is simmering on my Sony reader.) The last book of my choosing was Julian Barnes' The Sense of an Ending, a slender hardbound I loved, both for the writing and its particular truth: that memory is unreliable, that truth is subjective.

My teacher-friend, who I wrote about in the recent Thanks post, suggested two books she thought I’d like, both by a young author, J. Courtney Sullivan. Commencement, Smith's debut novel, is the story of four Smith College friends and their “graduate school of life”, as I call it—their escape from the cloistered ivy-covered walls of an elite women’s college and entry into the unprotected adult world. Sullivan followed with Maine, a fictional study of a matriarchal Irish Catholic family at their beach house in Maine, three generations of women each dealing with their own demographically-correct challenge: motherhood, marriage, legacy.

I read them, I liked them, I’m not sure I can recommend them to you. They were were well-written-- even if the structure of alternating narrators in both books was repetitive and felt sometimes like an MFA exercise. They were certainly engaging; when I left my copy of Maine at Maryl’s beach house over the weekend, I ordered up the e-version to find out the ending. 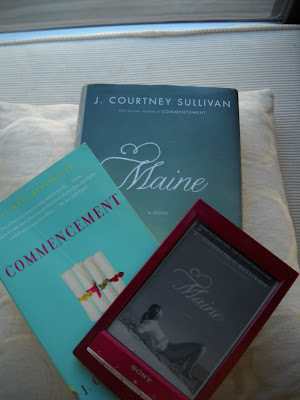 My teacher-friend liked the books, I presume, because they were an insight into a familiar world. She’s Irish and a (lapsed) Catholic, her kids all have Ivy-League degrees and are forging their way in the world. Much of the same could be said of me (no Ivy degrees, but my girls are the products of a liberal arts education as well) but the books felt like "lit lite" to me. After reading them, I looked up Wikipedia’ definition of another common term for this genre of writing: chick-lit. Though it can be a derogatory label sometimes--though not necessarily so-- I think it applies here. The talented Sullivan is a still a chick, if you will. Her truths feel too new—not test-driven. I have no doubt she will grow in her craft—in time.

TIME! That’s my test, I’m afraid, of what I read. Is it worth my time? Does this writer know enough about life or has had a unique experience or a unique take on a common experience that can show me something about life or myself. Writing may be one of those things that actually gets better with age, where truth is not crafted but home-grown and then dissected, examined in the light of longevity.

I recently complimented a fiction writer I know (her last book published over a decade ago was The Black Madonna) on a short story she had written in her youth published in a long-defunct literary magazine. "It's wonderful,"I told her, "Nearly perfect. You should be writing now."  "But that was 25 years ago," she protested.  Think how much better your writing will be now, I thought to myself --in your second life. Writing always improves when you have a sense of an ending . . .
Posted by Caryl 3 comments: