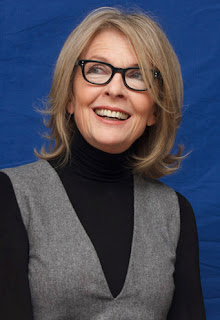 Who doesn’t love Diane Keaton? At 65, Keaton is the poster child for our generation. (Did you know she made her acting debut in the Broadway musical Hair, the only cast member NOT to take her clothes off?) Over the last 35 years, we have grown up with Keaton in big-screen, emblematic roles: first, as the loveably ditzy Annie Hall (1977), then as the dropout single mom who swapped shoulder-padded suits and a high-powered job for the country life and a country doc in Baby Boom (1987), next as delightfully-revengeful spurned spouse in First Wives Club (1986), and finally as the naked cougar who finds love with her daughter's boyfriend in Something's Gotta Give (2003). Through the decades, we followed her styles and her life stages while she collected accolades and an Oscar as a talented actor. So what’s she up to now? 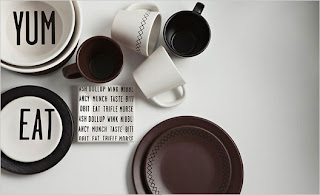 "As you know, I'm more of entertainment person," she told the New York Times this week, "but I have a real passion for design." These days Keaton is designing dishes for Bed Bath and Beyond. K by Keaton is a sturdy table top collection in “farm-y landscape colors”--wheat, grass, and bark, according to the heartland's sweetheart. Some of the stoneware cups, bowls and plates are stamped with her "trademark whimsy": Yum, Bite, Eat.“I don’t know why we don’t eat more food out of bowls," she told the Times reporter, "I could eat all of my meals out of bowls.” Good idea!

Keaton has always been an iconoclast, quirky but true to herself. Despite her high profile romances with such leading men as Woody Allen, Warren Beatty and Al Pacino, Keaton has never married. She came late to motherhood, quietly adopting a daughter, now 15, and a son, 10, with none of the ballyhoo of other Hollywood parents.

She’s taken unconventional roles and unconventional stances too.When producer-director Nancy Meyer cast her and Jack Nicholson in Something's Gotta Give, there was more concern about their box office draw than the scandalous the story line (middle-aged playwright gets it on with her daughter's much old boyfriend). "Let's face it, people my age and Jack's age are much deeper, much more soulful, because they've seen a lot of life. They have a great deal of passion and hope-why shouldn't they fall in love? Why shouldn't movies show that?" Keaton told Ladies Home Journal at the time. The film was a major success,grossing $125 million in North America. If onscreen Keaton had no fears being naked under the sheets, offscreen she is categorically opposed to going under the knife. She told More magazine in 2004, "I'm stuck in this idea that I need to be authentic ... My face needs to look the way I feel."


Keaton has always lived her passions, be they photography, music, architecture or design. Having lived in a Frank Lloyd Wright house in Hollywood Hills and an iconic Spanish house, she is currently renting. (Told you she was the pulse point of our generation!). “But I am going to buy a piece of land and build once in my life. I don’t know if I can do it but I’m going to try.” Way to go, Diane. That’s the spirit of a 2nd lifer.
Posted by Caryl