I only found her after she had died. Then she chased after
me, popping up unexpectedly on Salon, and then again in a recent  issue of the New York Review of Books. She didn’t come to wide attention until age 60 when she won the Nobel Prize for literature, the first female writer from Poland to do so.  Some called the shy, reclusive woman ‘the Greta Garbo of poetry'.  The notoriety paralyzed her from writing for two years; “the Stockholm syndrome", she dubbed it. 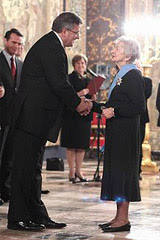 But then she began again. In a simple and accessible voice, she took on everyday topics :“chairs and sorrows, scissors, tenderness, transistors,violins, teacups, dams and quips”-- but in a profound way. I will tell you her name--Wislawa Szymborska--but it is hard to remember. Her poems, fewer than 400 in  her 88 years, however will haunt you.  She’s probably best known for "Cat in the Empty Apartment" but this is the poem that hooked me.

I’m a poor audience for my memory.
She wants me to attend her voice nonstop.
but I fidget, fuss,
listen and don’t, step out, come back, then leave again.

She wants all my time and attention.
She’s no problem when I sleep,
The day’s a different matter, which upsets her.
She thrusts old letters, snapshots at me eagerly,
stirs up events both important and un-,
turns my eyes to overlooked views,
peoples them with my dead.

In her stories I’m always younger,
Which is nice, but why always the same story.
Every mirror holds different news for me.


She gets angry when I shrug my shoulders.
And takes revenge by hauling out old errors,
weighty, but easily forgotten.
Looks into my eyes, checks my reaction.
Then comforts me, it could be worse.

She wants me to live only for her and with her.
Ideally in a dark, locked room,
but my plans still feature today’s sun,
clouds in progress, ongoing roads.

At times I get fed up with her.
I suggest a separation. From now to eternity.
Then she smiles at me with pity,
since she knows it would be the end of me too.

(Translated from the Polish by Clare Cavanagh and Stanislaw
Baranczak.)

If you want to read more of Szymborska's work, you might like Here (cover shown above), her most recent collection which includes "Hard Life".  She worked (and smoked) to her final days;
she died in Krakow, Poland on February 1.  Her last words will be published in the coming months. I'll let you know if you want me to.  But first tell me: Do you like poetry? Would you like to read it occasionally at Second Lives Club? Will you share a favorite poem or poet with us now?