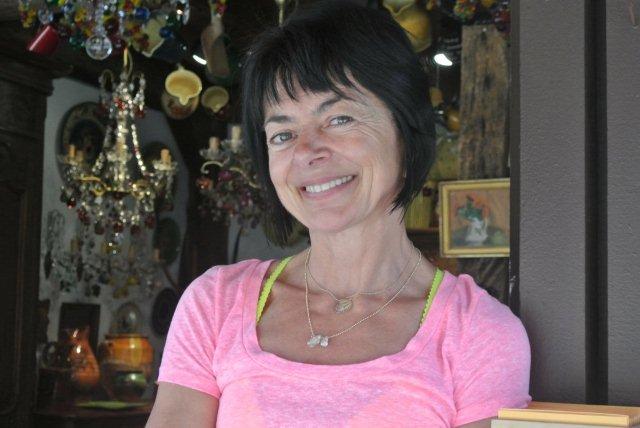 Claude-Noelle Toly grew up in Dieu Le Fint, a tiny village in the South of France. At 21, she and her then boyfriend flew to the United States and began a hitchhiking trip that traversed the country. The boyfriend didn’t last but her romance with the U.S. did.  “I fell in love with America and Americans.  I felt so at home here,” she says.

The next year, 1982, to her parents’ distress, their younger child and only daughter packed up her belongings, sold her car and moved to New York City.  One of her first jobs was as a waitress at Chez Bridgitte, a legendary Greenwich Village restaurant—more like a lunch counter with nine stools--started in the 50s by Marseille native, Brigitte Catapano, and known for its homey atmosphere and delicious Boeuf Bourguignon. While working there, Claude met a Columbia University student and Francophile who always left her big tips. In 1986, she and the student-turned-business partner opened LeFanion, a corner boutique in the heart of Greenwich Village that sells decorative pottery, paintings and antiques from France. 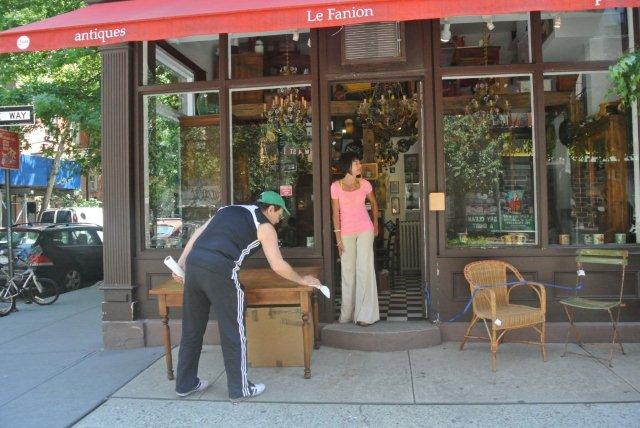 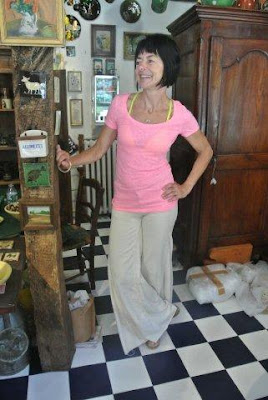 Le Fanion’s chic and original offerings, prized by loyal and fashionable customers, reflect Claude’s roots and tastes. They range in price from a polka dot eggcup for $17 to a $27,000 chandelier dripping with jewel-like crystal fruits and flowers.  The shop’s ceiling and walls are filled with twinkling chandeliers and sconces made the old-fashioned way and newly electrified: the bronze frames are sand-cast, the multi-colored crystal ornaments hand-ground from bars. There are also hulking 19th century armoires and zinc-topped café tables.  Even the fir columns supporting her loft office are imported from the French countryside. 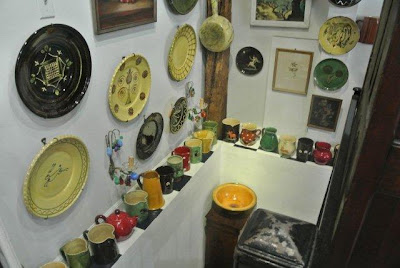 About a dozen artisans in the villages that surround Claude’s hometown make the pottery –pitchers, plates, cups, bowls and other whimsical items, some with charmingly naïf drawings of cows, pigs and sheep. She discovered them by driving around the French countryside, stopping at farm after farm. “This was before the Internet or cell phones”, she recalls.  Sometimes there would be just one or two farmers making a couple pieces over a season. 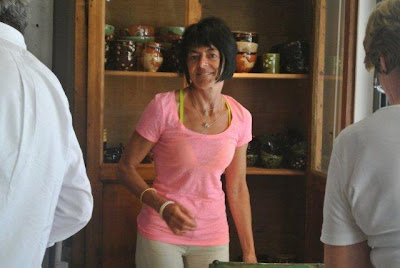 She still collects the pieces herself during buying trips four times a year and visits to her mother still living independently (hiking!) in her 80s. Claude credits her mother with her discerning eye and her sense of style, despite a “super conventional, good girl” upbringing. “I was raised to be a teacher--or a secretary. That would be glamorous,” she says. “Until I came to New York, I didn’t know you could be a hat designer or do props for movies. When she first arrived in New York City three decades ago, she couch-surfed with actors in the old, unDisneyesque Times Square until she found a roommate and an apartment. Those early experiences were life-expanding. Growing up, she had never even visited France’s capital city.  “We were told Parisians were mean. They would beat us up.”

Today, she owns a flat in Saint-Germain-des-Pres where she stays to recoup after her transatlantic flights and occasionally rents to longtime customers. The décor in the shop and her apartments—she also has a small studio on Bleeker Street in New City (which once was home to Pierre Deux’s first store but is now dominated by Marc Jacob’s multi-shop empire) is reminiscent of her family home. The furniture is mostly 19th century cherry and walnut pieces. Her parents collected antiques.  “People in the country just lived with this furniture,” she says. 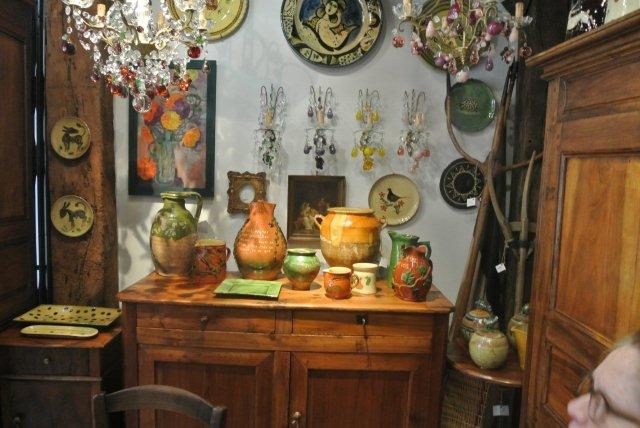 Equally as fashionable as the shop’s merchandise is the gamine proprietor who has a bequiling AudreyHephurn-in-Funny Face quality. Her personal style is informed both by her origins and her adopted country.   One recent afternoon we talked about French and American women while customers of both nationalities ‘ooh’ed and ‘ah’ed  as they shopped in her store:

On Style: Maybe necessity creates style. When I was a kid it was more common than now to make your own clothes, to knit your sweaters because it cost less than buying everything. For sure, it helped me have a more unique style. I try to not spend a lot on my clothes. I’m not big on designers; I prefer something a little different to a name. I like clothes that are fairly simple, making an outfit more personal with an accessory--a scarf, or a necklace. I used to buy vintage, but now not much anymore. I buy preferably on sale, very different places: Anthropology, Agnes B, Levi’s, and small boutiques when I travel.  I don’t think it’s inbred in French women.  My mom is very stylish and made our clothes. Other moms were not.

On French Women: I think we are more natural and grounded in reality, which is also true of the whole culture and country. Being a more agricultural society until recently and also a much poorer nation than the U.S., we were closer to a simpler past. I think it's changing, and that's a big subject . . . for another time!  We are the country of Descartes: practical, common sense... France doesn't have Hollywood. Instead of Marilyn Monroe, we had Edith Piaf....We don’t have the cult of youth that exists here: a woman in her 40s is considered very sexy (in France) -- not finished! Therefore maybe you're more encouraged to take care of yourself. Having a mistress is an accepted notion. Maybe women are more stimulated by this. Either to be one or to refrain their husband from looking for one!

On American Women: U.S. women are very inspiring for their independence and their tough spirit. To me, that's the ideal: the pioneer, free, liberated woman. I think she was an inspiration for the whole world. I have always found American women to be very kind, very sweet and very “girl power”. French women are more competitive among each other, have less solidarity. They are less open and less relaxed with each other than their American counterpart. I've learned from American women to be more sister-like and more loving towards other women.

On role models: The American woman I admire most is the pioneer woman: strong, reliable, courageous, always welcoming and solid as a rock, not complaining. In general (what) I admire and enjoy about Americans is they are easily happy, easy going, adaptable, jovial, friendly. Another type of woman that French women admire is the California healthy style: Farrah Fawcett orJane Fonda.  But that style might be a little dated now.

Some Differences:  I think France has been less permeated by corporate influences –for example, corporate products and advertising convincing you that you need what they are selling-- so it allows people to be more real. American women, I think, used to be more real but now have been reduced to a cartoon image of what a woman should look like. Authenticity is always more attractive than fakery. How can you be attractive when your face isn't yours, your boobs are not yours, your lips not yours? Being too removed from reality is not attractive.  Sweating when it's hot is okay. Feeling sad is okay.  I always find it more attractive to be natural—that’s why children are so charming-- than to be artificial. And I think Hollywood and magazines have created an image that cannot be met by most women--or men, for that matter.  Being natural and comfortable with who you are makes you confident and attractive. Trying to fit a mold just doesn’t work, and it shows. 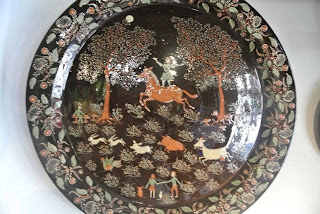 By The Way: If Claude-Noelle looks familiar, you may remember her from the July 3, 2012 post describing her 1.2K swim around Liberty Island.  She did it in record time but sent me this quote from the NYSwim site shortly after. "Don't watch the clock; do what it does. Keep going."


One More Thing:  Thanks to Tish Jett from A Femme D Un
Certain Age, who originally published this post.  Tish is American living outside Paris. (As she says, she came for work and stayed for love.) She is a talented translator of both cultures whose brilliant blog celebrates women of a certain age and sensibility, women like you and me.


(All pictures by Maryl)