Caryl contemplates: Christmas at Hyde Park on the Hudson 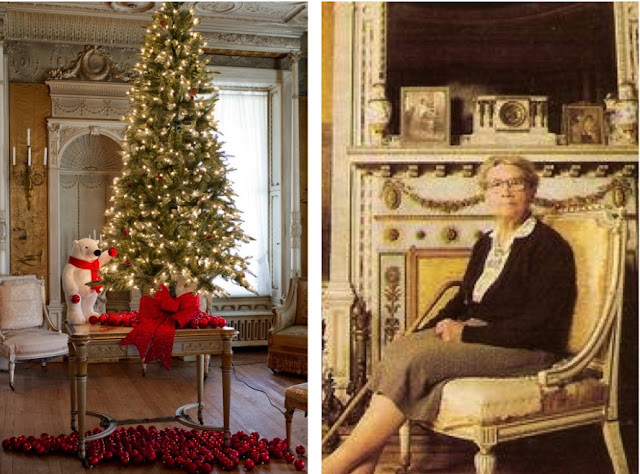 If I weren’t leaving for Zanzibar (no kidding!) on Thursday. . . and having my book club and the author of The Sisters Malone over for dinner and a discussion at my apartment tomorrow night . . . if it hadn’t been the weekend of Sinterklaas’s arrival in Rhinebeck—an event that turns the village into a twinkle-lighted slice of Americana to rival “It’s a Wonderful Life”. . . I might have made it to the nearby Wilderstein river estate to see the home of Margaret “Daisy" Suckley all done up in its turn of the century (that’s 19th) holiday splendor. You’ve never heard of Daisy Suckley? Well, get ready. . . .

Hyde Park on the Hudson Companion

The story of Miss Stuckley and her sixth cousin once removed, Franklin Delano Roosevelt, is about to the hit the big screen this week. Hyde Park on the Hudson recounts the tale of that fateful weekend in early June, 1939--12 weeks before the outbreak of World War II--when the President entertained George VI and Queen Elizabeth at Top Cottage.  FDR’s companion at the “infamous hot dog picnic” was—you guessed it—Daisy Suckley. Boy, did she have a second--or maybe a double-- life!

Daisy Suckley was born in the 35-room mansion that overlooks the Hudson River on December 20, 1891 and died there in her 100th year. She first met FDR when his mother Sara Delano called her niece to come sit with her son Franklin. He was trying to strengthen his polio-stricken legs by swimming at Vincent Astor’s swimming pool, which was not far from Wilderstein. They grew to be friends: she visited him at the White House, and he came to visit her at Wilderstein. It was not until Daisy died in 1991 that the  extent of their relationship became known. Under the bed in the top floor turret bedroom she occupied was found a suitcase stuffed with her diaries and letters to and from FDR.

For most of their relationship, the intimate companions kept their
involvement to themselves.When Roosevelt died in 1945, Daisy wrote to his daughter Anna and asked that she return the letters she had written her father. Daisy knew where he kept them hidden beneath his stamp collections. In the 38 letters returned to Daisy, Roosevelt writes of such hush-hush occasions as his secret  meeting with Winston Churchhill off Canada’s coast in August, l941--shortly before the impending D-day invasions. He also describes the frustrations of the job and his future plans for a post-war world. There is talk too about parties and cruises and the changing seasons—and of course, the antics of Fala. Daisy bred dogs, and Fala was a gift from her to FDR. You can read the letters and learn more about the cousins in  Closest Companion by historian and Roosevelt biographer Geoffrey C. Ward. 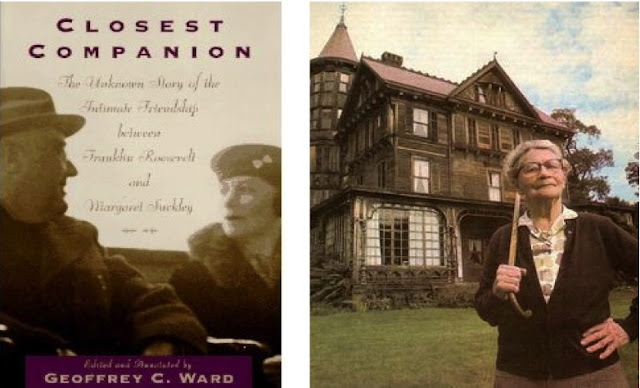 And, if you are interested in the house's history, you can read Cynthia Owen Philip’s recently updated book Wilderstein & The Suckleys: A Hudson River Legacy. Or, why not have Christmas tea December 8 with Philip at Wilderstein when she will discuss the Suckleys and a home that was both folly and family shelter. All this month, the house is bedecked for the holidays, and there are  tours of its rooms on Sunday afternoons. 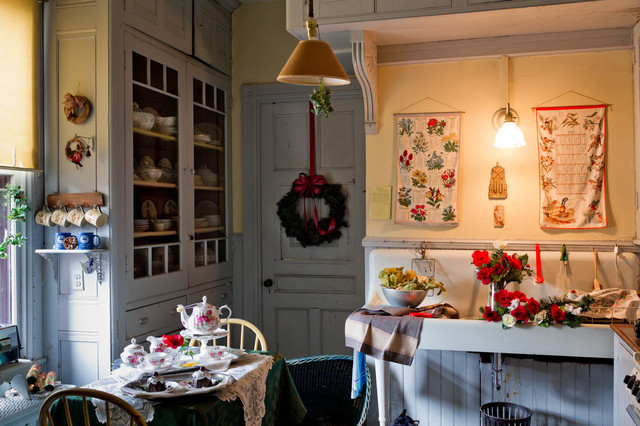 I saw the house in fall with its sweeping veranda, its Tiffany windows, its formal dining room and cozy kitchen (above) as well as the first floor library where the infirm Daisy slept in the last years when she could not longer take the steps to her turret bedroom.  The library (you know how I love libraries!) is beautiful,  filled with  FDR's books and a painting of the Statue of Liberty Daisy took from the Oval Office shortly after the "love of her life" died. I asked the guide that autumn day whether Roosevelt and Daisy were lovers, as the upcoming movie trailer insinuated. The tightlipped woman, who had met Daisy before she died, would only say this: “Daisy was a dreamer, FDR was a womanizer." The movie? "It's a Hollywood fantasy.”  I am going to see for myself. . . after I get back from Africa.