My question, as we approach Father’s Day, although I have been thinking about it for a while, is how well do we or did we know ours fathers? I mean not just know them as a dad but also understand them as a man. I was beginning to see my own father (that's him and me in the photo above) outside his head-of-household role and through my second life lens. But then he died on me - at age 92. You can’t quibble with that kind of longevity but it’s never enough.


I came upon three women who were evidently asking the same question and more. I met Karen Fisher-Alaniz online through this blog actually. She had just written “Breaking The Code,” a memoir of a man she knew only as her father. On his 81st birthday, Murray Fisher gave his daughter two notebooks with 400 pages of correspondence he had written home to his parents in Washington state during WWII. There was a lot in those letters that her dad had tried to tell her over the years. Karen admits now that her life was so busy then she didn’t listen or catch on that his stories and their revelations were worth the time. She has now learned that her father was a code breaker in the Pacific theater. That generated many more questions, one in particular would decipher the secret that had overshadowed Murray all the years inbetween. Karen felt her father’s pain amidst his newly discovered heroism and wanted to understand and help him even more. 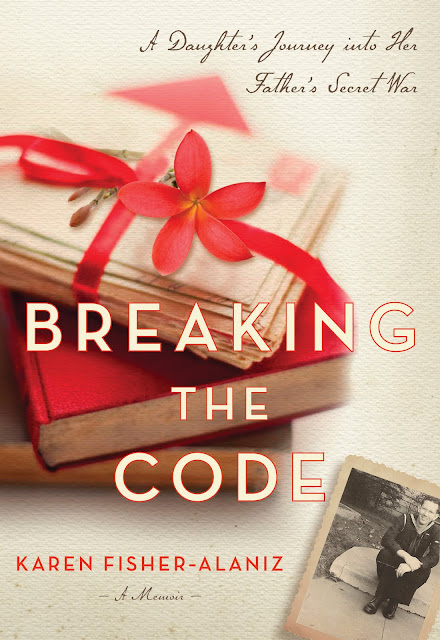 I met Maxi Cohen recently at a NY Women in Film & Television gathering. I learned that we both started making video in the ‘70’s when you threw a Sony Portapak on your back, even though it weighed over 18 pounds, grabbed the camera and started shooting. Maxi started shooting Joe, her father. She had felt distant from him, at times even afraid of him, and couldn’t express her feelings that ran from love to anger to hate. Then her mother died and Maxi was adrift and had no sense of herself. She was scared that if she lost her father, she would feel nothing again. So she filmed Joe as a way to get to know him for the first time. “Joe and Maxi” is that film. Joe Cohen is a kind of movie character that doesn’t come from “central casting.” He is fascinating to watch on the big screen but difficult to understand and to love in real life. Maxi accomplished both and in so doing got to know herself better too. 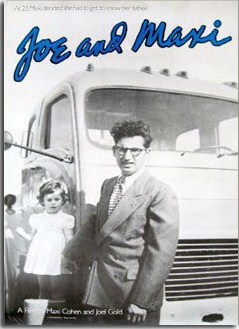 I met Marcia Rock decades ago as we were starting out as video and film makers also. She went on to receive many awards and recognitions for her documentaries and became a professor and Director of Broadcast Journalism at New York University. Her father Manny Rock was also quiet and distant in his family interactions and Marcia wanted to understand perhaps how this first man in her life may have had some effect on her subsequent male relationships. In order to do this, she quickly found herself tracing her paternal grandmother’s heritage back to Slovakia and then Cleveland, Ohio where Marcia grew up. In her film “Dancing With My Father,” Marcia reveals the struggles her family overcame and the effect it had on her father’s guarded demeanor. And she picked up a few Mambo steps on the side.

As I think again about better understanding my father, producing a film is no longer feasible as Maxi and Marcia have done. But Karen’s story prompted me to look through my dad’s personal files that are now distributed among mine and my siblings’ attics. Either my father, Jim Floyd,  wasn’t as prolific as Murray Fisher or my grandma wasn’t as sentimental as Karen’s since I only came across a few letters written to his parents during wartime. I know there were more but the ones that I found were the sweetest. My dad was one of the last to return home from the European theater and he had apparently already proposed to my mother but was unable to be there in person to make it official. In these letters he has made arrangements to have his “Dear Mother and Dad” present the engagement ring to my Mom. My father relays in one letter that Gen, my mother “has been quite enthusiastic about her ring...." You can read more below if you like but I see that my father had a cordial and adept writing style, precise penmanship (he was a graphic artist) and a dutiful and caring relationship with his parents. 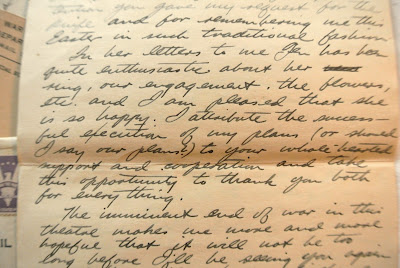 As Karen read her dad's letter, she discussed her findings with others. And people shared their guilt and disappointment over not getting their fathers to talk about themselves. Sometimes their stories would "come after death, when letters or memorabilia were found, leaving the child with the unbearable burden of always wondering if there was something they should have said or done to encourage their loved ones to tell stories of their past.”

I understand what Karen is saying but I don’t believe guilt or regret have to be the consequences. She had a hard time getting her father  to open up and talk; it became painful. For those of us whose parents were members of The Greatest Generation, we’ve learned that when WWII soldiers returned home they wanted to just move on with their lives. They were modest about what they had sacrificed for their country and weren’t particularly interested in talking about it. In addition men of that era didn’t reveal their feelings that easily if at all.

My daughter did an oral history with my father for a school project and when she showed him medals we found in his home, he didn’t recall receiving them and thought they must have belonged to someone else. After his death we found a Diplome from the French Ministry of Defense and an accompanying letter thanking him for the part he played in the liberation of France during WWII. They were tucked in with a pile of old advertisements and bills but are now framed and next to the flag the military honor guard presented to me at his grave site. 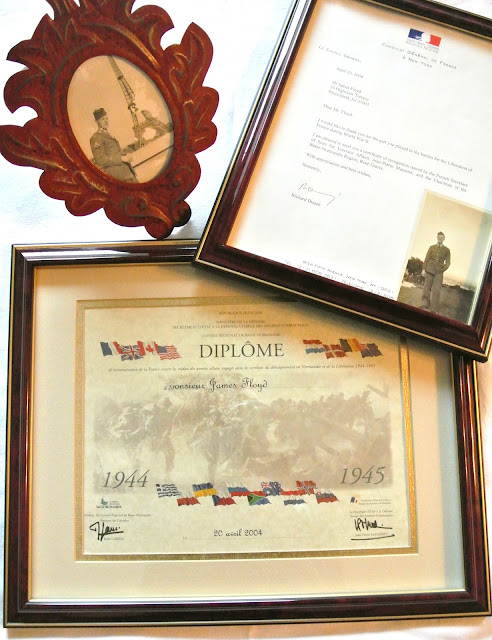 My father would have been colorful subject matter for a documentary or memoir but he wasn’t an enigma. I don’t believe he had any demons that kept him awake at night. I have questions now I’d like to ask him but I would have had them anyway.  If you already cherish someone just the way they are, do you really need to know more? On the other hand, one of my brothers tells me there’s another old trunk we’ve yet to delve through. A little more decoding can’t hurt.
Posted by Maryl