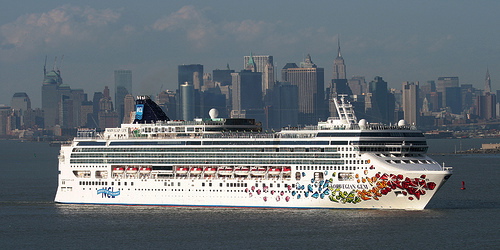 This next post was to be about my husband and I rediscovering the playgrounds of our youth in the Caribbean. I finished a draft while still onboard our cruise ship, the Norwegian Gem, but will post at a later date. Right now I feel more compelled to write about the devastation of other playgrounds--those of our earlier youth, as a high school friend put it. St. Thomas, Puerto Rico and St. Martin experienced some of the storm surge but the New Jersey boardwalks of Point Pleasant, Seaside Heights, Asbury Park and Atlantic City--where I spent fond summers in my teens and 20s-- are gone.

Hurricanes were the furthest from my mind as we boarded the Gem two weeks ago today. And, that is not said glibly as a home owner on the eastern seaboard. Our Captain first mentioned Sandy as we left St. Martin for St. Thomas, saying that we were a safe distance from the storm whose strength was still unknown. Sandy could effect our stop at the Dominican Republic, he told us, where tender boats were required to go ashore. And sure enough as Sandy increased its threat the Captain decided to head home from St. Thomas trailing the hurricane and keeping east of its center so we could arrive in New York safe and as scheduled, 8 am the last Monday of October. 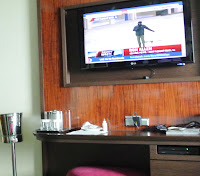 We had 24 hour MSNBC and Fox News, the two most polarized networks, in our cabins and throughout the decks the entire time onboard. But politics was slowly taking a back seat to the weather, and we actually wound up having more crisis information than the folks at home The typical media hype aside, we could sense this was not your usual hurricane threat.

The sea started to get choppier but the Gem arrived within shot of the New York harbor by Sunday only to be turned away. The harbor was closing at 6PM, and if you weren’t scheduled to dock Sunday you weren’t allowed in until further notice. We moved to a new position about 300 nautical miles southeast of Nantucket and were to remain there indefinitely.

So you continue doing what one normally does on a cruise ….eat, drink and be merry. In the case of a hurricane….eat, drink, be merry, hold onto the railings, take your dramamine, don’t be in the way when your closet and cabinet doors fly open, catch your food when it starts to slide off the table, and if that food isn’t settling right get to the personal convenience bags near the elevators (which, by the way, were no longer operating as a safety precaution.)

The Captain congratulated us all for going through a perfect storm. The waves were as high as 30 to 40 feet at Sandy’s peak but we were never at risk of taking in water. This was true despite a misleading Fox report with a video of water crashing over the sides of a Norwegian ship that wasn’t ours and a phone interview with a passenger on board the Gem whose only concern was that we might run out of food, which never happened. After hearing about all the planes and trains being cancelled, Fox's report--despite its inaccurate visuals-- was nonetheless heartwarming. At least someone was thinking of the poor ships stuck at sea. Make that ship--singular--stuck at sea. Apparently, the Gem was the only vessel without a port in the storm! 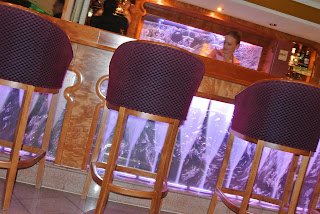 The cruise line made it as enjoyable as possible…more entertainment, more bingo prizes, more 2-4-1 drinks in the cocktail lounges but as the hurricane hit land and we held on to the railings even tighter, the focus and concern grew more intense. What was happening back home and why hadn’t we heard from our Captain after his then daily calls with the Coast Guard?

Finally, at the happy hour martini sale on Tuesday in the Star Lounge, the Captain announced that due to debris in the Hudson River, like cargo containers, we could not enter the New Yord harbor until a thorough inspection was completed. We were being diverted to Boston to refuel and yes to get more food. We had the option to get off and find our ways home or stay on board until we would be allowed back into New York. Cocktail glasses were left half full as passengers made a mad dash to call relatives, change flights or rent cars as we did to drive home to the disaster zone. Three quarters of the ship’s passengers bailed in Boston.

Driving home through Hartford, Connecticut, making sure to stay away from its- coastline, we stopped at a Walmart to buy food and any non-electric camping equipment that was left. But good luck finding D cell batteries – the new currency - even that far away!

We pulled into home and into the welcoming arms of our daughter, who had weathered the storm with an evacuee friend from Brooklyn and our condo association that had set up its own shelter in the lobby area. So we left not only warm meals, 24-hour TV news and entertainment for cold showers, canned foods, twelve flights of stairs to get to my apartment, phone and computer charging stations, gasoline lines and not a clue when the power would return. 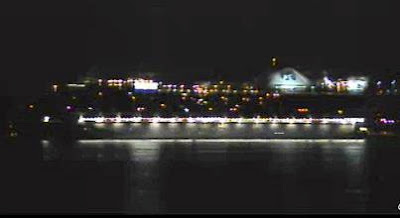 Take me back to the Gem. I watched from my apartment balcony as the ship pulled in to port Friday at 8am, four days to the hour past schedule. It crept in slowly, stealthlike. against a still darkened NYC skyline.

I am now writing this post by candlelight. I spoke with the mayor of my town yesterday morning who at least felt assured we were talking about days and not weeks before power was restored. That was reassuring but anyone’s guess as to its certainty. I also heard from a friend who works with the mayor’s office in one of New Jersey’s largest cities. Their financial institutions with huge infrastructures are up and running but they’re using old fashion pamphlets and bullhorns as a way to update the residents. Another friend from Pasadena also called to check in, and we compared Sandy to the Santa Ana winds that ravaged her city with 80 to 90 miles winds last year.

Caryl hitched a ride to the Hudson valley. Another friend made it to her daughter’s home in western Massachusetts. A neighbor near my shore house is in California; another in Ohio, and the rest are scraping mud off their first floors. (The NJ shore is an entirely another story that is too close to home – no pun intended – to report on right now.)

I guess I’ll make another cup of instant coffee. My husband is trying to cook eggs on the balcony with our new camping equipment. My daughter is starting to lose it with no internet connection or TV. I’m hoping to transfer this post to a flash drive and then to my iPad and then copy and paste into the blog template. Sorry there won’t be many pictures for now.

We all may need to think some more about where and how we spend our second lives. I see the Norwegian Gem is cruising out of NewYork harbor again. Life was easier on the high seas.