Caryl addresses: Miuccia Prada and Her 7 Elements of Style 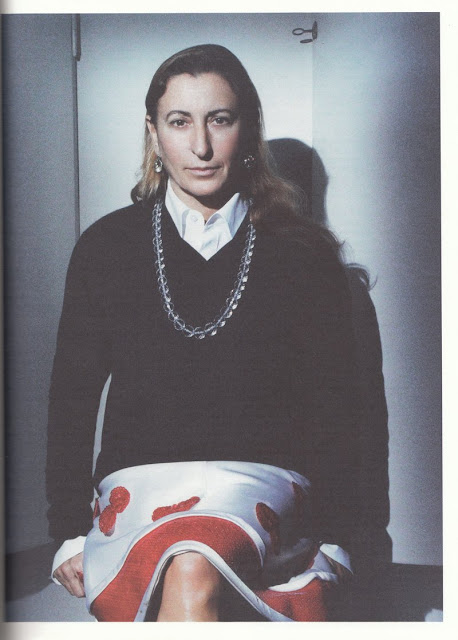 Miuccia Prada may be the most influential designer in the world today but she readily admits her own ambivalence about fashion. At 63 with a PhD in political science, she is the ultimate fashion insiders’ outsider: smart, fearless and iconoclastic. She grew up in Milan—she still lives in her childhood apartment, though she has another one for her clothes—and reluctantly took over her grandfather’s failing luggage business at age 39. Over the last few decades, she and her husband Patricio Bertinelli have turned the company into a multi-billion dollar global brand. Prada—the label-- is currently enjoying a robust second life, like the woman who shares its name. 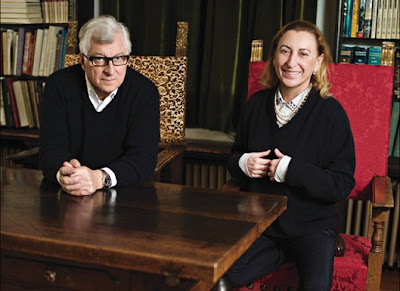 Currently, Miuccia Prada is the living half of a new show at the Metropolitan Museum of Art's Costume Institute: Schiaparelli and Prada: Impossible Conversations. The exhibit juxtaposes the clothes and careers of the two Italian designers from two distinct eras, interspersing their world views. When my older daughter and I saw the show in mid-May, I encountered this quote from Prada and felt the stirrings of another girl-crush: Women always try to tame themselves as they get older, but the ones who look best are often a bit wilder. Thinking about age all the time is the biggest prison women can make for themselves.

Prada’s designs are classic, cool, cutting edge and, surprisingly, comfortable. In my own wardrobe I have a black safari jacket that has seen many miles and a few war zones and a pair of patent leather pumps that have been guests at weddings, graduations and an occasional ladies' lunch. Both I bought at substantial discount at Century 21. I once owned a pair of Prada driving loafers bought full price at Bergdorf Goodman’s, and they were worth every cent. (As a former cub reporter at Footwear News, I can assure you Prada has one of the best’s shoe lasts for women our—actually any-- age.) That's the extent of my Prada collection.

Even if you can’t afford Prada, you can get the look by studying the designer’s elements of style and understanding her underlying philosophy. “I don’t care what makes a woman desirable to men,” she once said, “(I care) what makes a woman desirable to herself.” It has been said that Prada designs for herself both physically--she has a womanly torso and slender legs--and intellectually (she’s a long-time feminist and one-time Communist.) The result is a ladylike look with the air of a woman: beauty and strength combined.

Here, then, are Miuccia’s Prada elements of style for feminine dressing with a feminist twist.

1. Skirts, skirts and more skirts: Prada’s skirts are distinctly post-modern and the undisputed foundation of her collections. The fabrics range from traditional wools and silks to sequins and feathers. The lower half of female body is all about “birth and sex,” according to Prada, who is the mother of two grown sons. 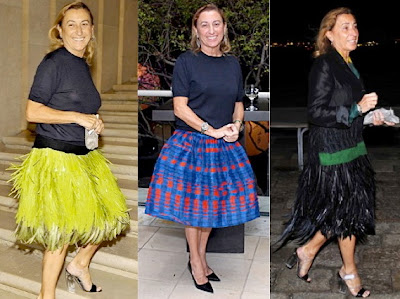 2. Classic sweaters and mannish shirts: For the upper half of a woman’s torso which Prada describes as “spiritual," she prefers traditional tops: turtlenecks and v-necks sweaters, shirts in pin-stripes or with Peter Pan collars.   She favors what might be called mother superior chic—perhaps a reaction to her strict Catholic upbringing. She once said: “I’m always happiest when I dress almost like a nun. It makes you feel so relaxed.”

3. House dresses: For her wedding in l978, Prada wore a cotton dress in army gray with a man’s camel overcoat. Thoughout her 20s, she mostly wore YSL but in her bohemian days she favored thrift shop vintage dresses with high-heels. Today, she often wears shirt dresses or a simple shift. 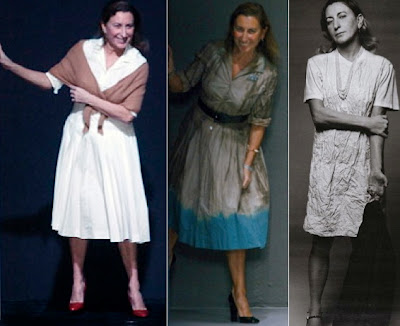 4. Coats and shawls: There is something modest about her choices in outerwear. She is often fully-covered, her breasts obscured. “I have nothing against super-sexual fashion. What I am against is becoming a victim of it." The shawl too is a wardrobe staple in artisanal weaves or slinky fur. 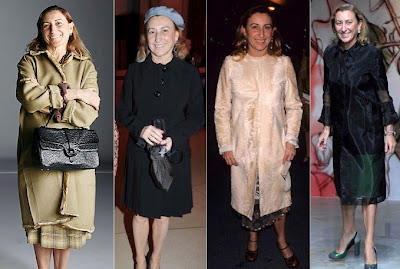 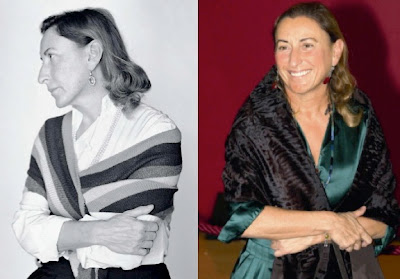 5. Serious accessories: You expected something else from the daughter of a well-heeled, upperclass Milanese family whose family business was luxury leather goods? “I also struggled instinctively against the cliché of a beautiful, rich woman. I have nothing against a beautiful, rich woman—just the cliché of it.” In her own cliché-busting style, she’ll wear mink with workmanlike trousers, slippers with an evening gown but her jewels are generally real and often antique. “One of the reasons I like antique jewelry is that I like to live the lives of other women,” she says. 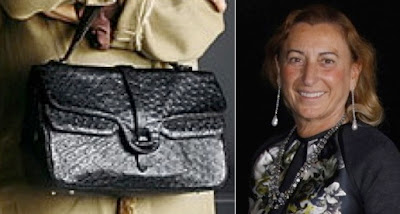 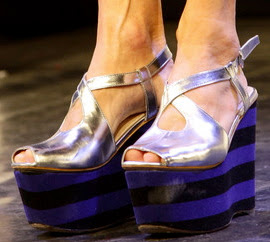 7. A touch of  whimsy, a dash of outrage: Berets, head bands,  banana earrings, even a rock star leather jacket with a  silver mylar skirt. These eccentric choices Prada pulls off with aplomb. 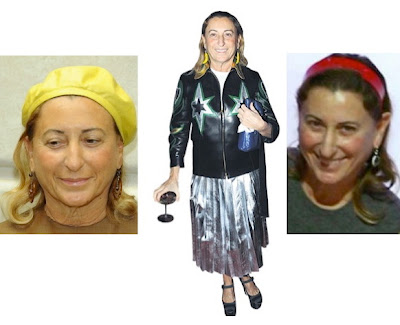 There’s no doubt that the clothes Prada conceives—she neither sews nor sketches-- are the product of her instincts and intelligence and, to some degree, a perverse arrogance “Brown is a color no one likes so of course I like it because it’s difficult.” Not just any hue of brown, her choice has been described as the color of a swamp. 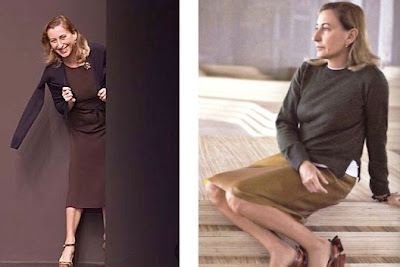 Like the woman herself,  her collections are filled with contradictions. She is the original joile laide of au couture. (Translation: pretty/ugly) Under her tough skin, however, beats a soft heart. “When I design and wonder what the point is, I think of someone having a bad time in their life,” she recalled in a rare interview. “Maybe they are sad, and they wake up and put on something I have made and it makes me feel just a bit better. So, in that sense, fashion is a little help in the life of a person.”