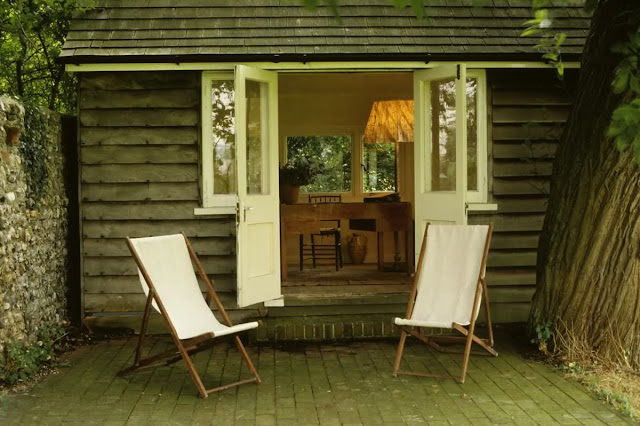 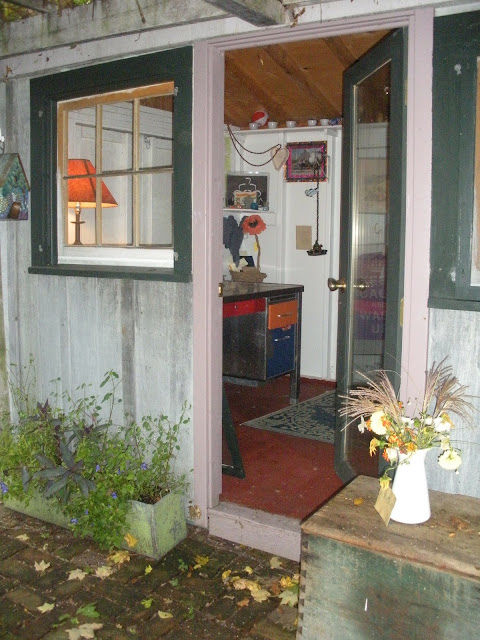 My writing shack is still a work in progress, furnished with hand-me-downs (my daughter's desk, and an old boyfriend's lamp, which you can see above);  yard sale treasures including a pair of French park chairs that in summer sit belong the covered pergola (which you can't see), and souvenirs from my travels and my life (which you will soon see). It is my own personal museum, the secret parts of myself I sometimes shield from the world are on permanent exhibit here. 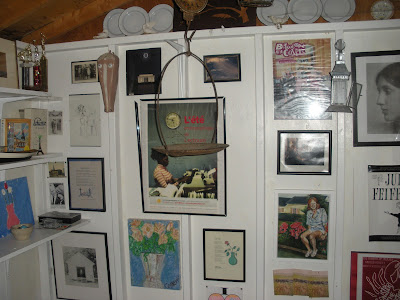 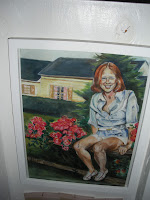 that delight or inspire or remind me of past lives: a poster from a photography exhibition in the southwest of France, the cover illustration for my daughter's poetry book,  a picture of me with President Clinton at a state dinner,  another of a chapel where JFK Jr. was married on Cumblerland Island, Ga. that ran in Real Simple when I was editor, some framed broadsheets of favorite poems (gifts from the same ex again), paintings by my children--one of me in younger days (see at right),  and an old snapshot of my parents on their wedding day. There is an altar of sorts too, with carved and bronze Hindu deities I've acquired from my travels to India including a baby Krishna dressed in a wildly-colored, spangled frocks. 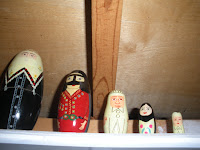 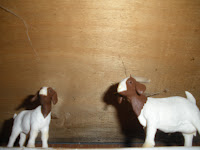 Poised on the narrowest of shelves are gifts from friends and that ex again. Among them are Arabic nesting dolls, each with its own head scarf, and a set of German farm animals--mothers with their babies--that only get to come indoors to the big house on Christmas eve to join the Nativity set my grandfather made. 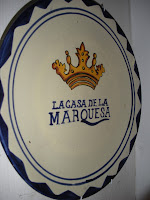 There is also a pottery charger I brought back from a trip to Guanajuata, Mexico shortly after my mother had died. I had gone there to grieve,  staying in a hotel that had its own private chapel. The building had been a monastery, where once the mistress of a very rich man had lived as a nun.  Later, she left the order to become his Marqueza. (I should write that story when I am sitting at my desk blocked instead of pondering the second lives of women.) 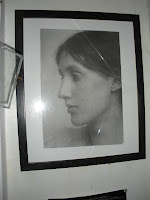 And, of course,  there is a picture of the author who inspired this place. I bought a copy of this print on that very same trip to London when I visited Monk House. The original, at the time, did not hang in the National Portrait Gallery (which owns it as well as many other famous writer portraits) but was in the museum's storage. (And, can you believe they wouldn't bring it out for me? Ha!)


My 'lodge' is in the Hudson Valley, not the English countryside of course.  It's hard to find, especially now in fall when the garden is overgrown and the brick pathways littered with leaves.  Soon, even with my space heater and my down vest, it will be too cold for me to go there.  The first frost came last Friday, and next month I will put the garden to bed--and maybe close the writing shack as well. 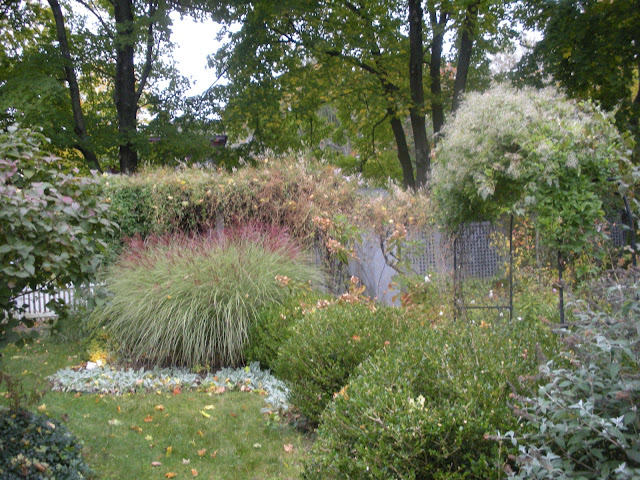 If by chance, you should happen upon the shed--(bet you can't find it in the photo above)-- in another season, I must warn you: if you see this sign sitting on the rifle case by the door, it means "do not disturb".  The muse doesn't land that often and when she does, she doesn't like to be interrupted. 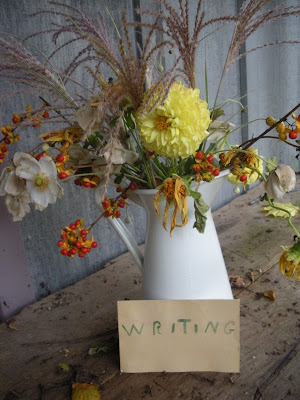