Ephron not only captured the essence of a generation of women (mine and, I suspect, yours) but she also nailed the state of the media at the time. She wrote about the former subject in Crazy Salad, which was published originally in 1975. And, she made notes on the latter in the next book, Scribble Scribble, which came out three years later. Those two books were fixtures on my book shelf during my twenty-something years, read and reread, marked up and down, a repository for my deepest desire, my unrealizable dream:  If only I could write like that . . . .


At the time the essays in those books were being published, I was a journalism graduate student doing my last semester in Washington, D. C. The biggest story of the century--Watergate-- was breaking. (See "Rose Mary Woods--the Lady or the Tiger".)  I was dating a Time magazine reporter whose beat was the Supreme Court. One of his friends was Carl Bernstein, who--used guessed it--was dating Nora Ephron.  I think we went to a cocktail party in  their house in Georgetown one time but. . . I remember nothing. All I know is that lots of the things I was experiencing at the time and over the next few years Nora Ephron was writing about in her essays: "On Consciousness-Raising",  "People  Magazine",  and  "How to Write A Newsmagazine Cover Story".  Reading her take on these shared subjects was not only entertaining, it was educational.  She not only shaped my view of the world or at least popular culture, but she made me think hard about my role--and responsibility-- as a reporter.

As a reader and a writer, I loved finding someone who saw contemporary life so accurately and rendered it so amusingly. It wasn't so much the laugh-out-loud humor I wanted to emulate, what I envied was her dead-on ability to call out the truths at the same time  she was living them. I looked for these early Ephron books when she died last summer but couldn't find them. That's why I am so glad that Vintage Books combined them in a single edition that came out this month. 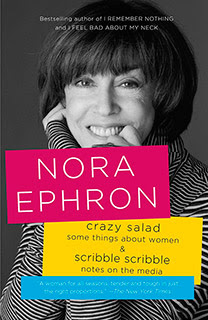 My daughter, a journalism junkie herself, and I rushed to the bookstore to get a copy the day before the October 16 release. (We made the clerk unpack it from a box in the back. It wasn't even on the shelf yet.) I was planning on reading it that night and posting 10 great truths Nora knew before we did  on this very site. Here's an example taken from "Miami", a piece she wrote about covering the Democratic convention, the one that would nominate the recently-departed George McGovern, the one where a group of women including Betty Friedan, Gloria Steinem and Nora herself hoped to get Shirley Chisholm nominated as vice president.  At the very least, they wanted McGovern to hear them out about women's issues.  Nora recounts in the essay:

It's just that they won't take us seriously," Gloria Steinem says, crying.  "I'm just tired of being screwed and being screwed by friends. By George McGovern, whom I raised half the money for in his first campaign, wrote his speeches. I can get in to see him.  That's easy. But what would be the point? He just doesn't understand. We went to see him at one point about abortion, and the question of welfare came up. 'What are you so concerned about welfare?' he said. He didn't understand that's a women issue.

Anyway, as soon as we got home from the bookstore, my daughter grabbed  the book. She has her own connection to the author's life. Her first journalism job after college was at NewYork magazine where Nora Ephron once worked for Clay Felker (See "The Revitalization of Clay Filter:Yet Another Passage"), and when my daughter was a baby, she was asked to audition for the role of the writer's baby in Heartburn. (She didn't get it because she couldn't recite Itsy Bitsy Spider!) "Oh, Mom, this is so true," she gasped after reading only the first page of "A few Words About Breasts". She read passage aloud, accompanied by demonstrations:

We learned that the way you sat, crossed your legs, held a cigarette and looked at your nails--the say you did those things instinctively was absolute proof of your sex."

Then she returned to her room book in hand, reading through the night . . . .

Truths, big or small, are irresistible and enduring. And,  recorded truths can be passed on generation to generation, sometimes with a giggle of recognition and sometimes with a tear of remorse. I will miss Nora Ephron's voice but I am glad I have her earliest works on my book shelf again.  I think that's the best tribute.
Posted by Caryl