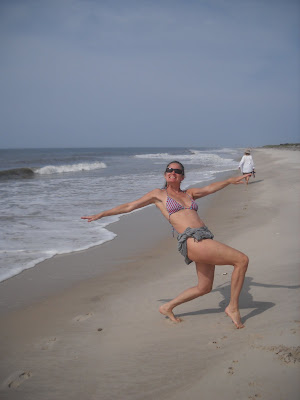 Nothing says summer like a frolic in the surf-- even if the water temperature was 55 degrees as it was Father's Day weekend. My friend Kayte, also 55, didn't mind. Throwing on a bikini and dashing into the waves made her feel alive and ready for an endless summer. That weekend was pure bliss as I helped her open her beach house and prepare for her much-awaited season of family togetherness.
Kayte is a single (and always working) mother of two children--a teenaged daughter (you know what that's like) and a just turned 21-year-old son who was currently completing a rugged 78-day survival course in the Australian outback and due to return the end of June. With dreams of the long 4th of July weekend ahead and her family intact, Kayte could hardly contain her excitement.
Then she got the call. Her son had been hospitalized with an open wound and a staph infection. He was indefinitely banned from flight. Kayte jumped on the next plane and within a day or two if you count the time change, she was at his bedside on a distant shore. Just yesterday--more than a week and much worry later, I received this email: Alas, medical clearance and on our way home tonight! I am ravaged by the experience, but fine knowing the beach awaits me... what a dark abyss down under...emerging to the light..
I thought about our time together two weeks earlier at the beach, the tide coming in and out, the powerful surf slapping into us with cosmic force, the exhileration of surviving each wave, the anticipation of another right behind it. There was a time not long ago, when the metaphorical waves could flatten me--wave (breast cancer) after wave (my firing) after wave (the dissolution of my marriage) after wave (my parents' deaths) left me not just weakened but despondent.... In my second life, I've learned to ride the waves, to stay in the super-charged, alert to all life's moments between them. There will always be another wave. But the joy of conquering the one just behind us is incomparable, and the knowledge that we will be standing stronger after the next is both the challenge and the satisfaction of a second life.
Posted by Caryl