Women and War and Freedom of the Press


She liked parties and pearls, sailing the open seas and drinking to dawn. She loved her friends--and she loved her work. It was said she wore a La Perla bra under her flak jacket. She was a complicated woman for complicated times. And, she was a rare breed: a war correspondent, rarer still because she was a woman. This week, 88 journalists from 25 countries who died last year while covering the news were honored at the Newsmuseum in Washington, D.C. Among them was Marie Colvin, who died at 56, in Syria in 2012. Over her 30-year-long career, she had covered conflicts in several countries, losing her eye in Sri Lanka’s civil war. Accepting the Courage in Journalism Award from the Internal Women’s Media Foundation in 2000, Colvin said: “What’s important is trying to bear witness. The pain of war is beyond telling.” 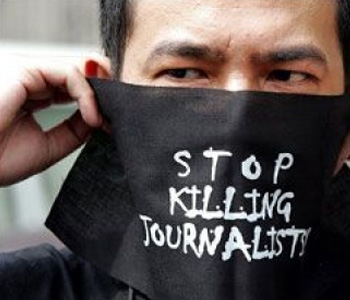 At the Newsmuseum on Monday, Richard Engle who recently was  captured himself in Syria, said: Journalists take risks "to understand the world and how it changes. We go to where the cracks are." The honored journalists died "doing what they loved. They died in the line of duty with their boots on and their pen in hand."


There were only three women among the honored at the ceremony, and Marie Colvin was the only American. Her mother, Rose Marie Colvin said her daughter was on the verge of leaving Syria because it was so dangerous: “She had to stay. She wanted to finish one more story.”

In her final dispatch from Homs, Syria, she told the BBC:  'I watched a little baby die today - absolutely horrific, just a two-year-old boy who was hit, they stripped him and found the shrapnel had gone into the left chest. The doctor just said ‘I can’t do anything'.  His little tummy just kept heaving until he died.”

Is this a different story than her male colleagues might have reported? I am not sure but I think so. Women often see the human side of warfare. Marie Colvin consistently championed the innocent victims of political conflicts. A foreign correspondent for The Sunday Times in London for two decades, she described the violence in Syria as “absolutely sickening." She condemned the Syrian Army of perpetrating the "complete and utter lie that they are only targeting terrorists. The Syrian army is simply shelling a city of cold, starving civilians."


Marie Colvin—she of the pearls and La Perla-- didn’t get a second life but the legacy of her first can inform our own. Her grieving mother told reporters shortly after her daugther’s death she was talking to them because “Marie wasn’t a  "no comment kind’ of girl" And nor should we be. We need to bear witness. We need to speak our minds. Vote our opinions. Live our lives fully.

Here's how Marie Colvin's mother described her daughter's legacy
Be passionate and be involved in what you believe in.
And do it as thoroughly and honestly and fearlessly as you can.
Posted by Caryl

Email ThisBlogThis!Share to TwitterShare to FacebookShare to Pinterest
Labels: A Life Well-Lived