Maryl writes: And the real winner is…… 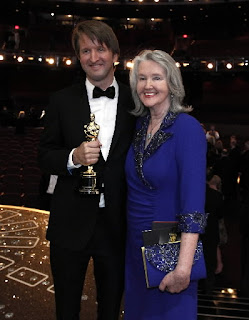 Meredith Hooper!  Who?  She’s the mother of Tom Hooper who won the Best Director Oscar last Sunday for “The King’s Speech.”  Considering all the award winners who repeatedly thank their mums, this one was really heartfelt.  She led her son to the story filled with all its “humor, irony and thoughtfulness” as she put it.  Four of the top Oscars were awarded this film; a fifth one should have been bestowed on her.  But no problem.  She’s already won dozens of honors and citations for the many scientific, children’s and comical and whimsical books she has written.

In Everyday Inventions Meredith explored the discovery and back stories behind such innovations as false teeth, zippers, lipstick and cornflakes.  She mixed history and fiction for school children in stories like Who Built the Pyramid? and Race to the Pole.  She was educated and taught at the most prestigious institutions and was the first woman on the editorial board of The Round Table – the Commonwealth Journal of International Affairs.  But she didn’t indulge in her lifelong fascination of the world's coldest places until the past 15 years visiting and writing on Antarctica.  She has lived there on science bases and research vessels for Australia, the US and the UK.   She was awarded the Antarctic Service Medal by the National Science Foundation on behalf of the US Congress for this recent work.
But back to the Academy Awards.  While she was probably one of the most prestigious members of the audience that night, we wouldn’t have known about her if her son hadn’t won his Oscar.  How lucky for him and for us.
This is a new way of bringing art and science together.
Posted by Maryl

Email ThisBlogThis!Share to TwitterShare to FacebookShare to Pinterest
Labels: TravelLearning