In the last years of the last century, I used to read only female authors --and more often than not living female authors. I was searching for emotional truth and also clues how to lead an authentic life. Women seemed to understand the interior landscape, maybe because women understood Virginia Woolf's explanation that we write (and I'd add, read) to make ourselves whole. Maybe that is why I am particularly sensitive to the gender of the authors of the books I read. 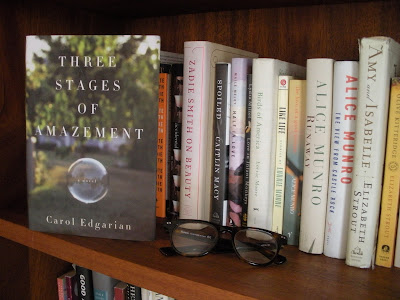 Yesterday in one of my one-sitting marathons, I read the poorly titled but beautifully written "Three Stages of Amazement" by Carol Edgarian. The book-jacket notes describe her second novel as "a grand love story and a dazzling social chronicle of turbulent America today". If Jonathan Franzen placed his much-acclaimed novel "Freedom" in the heady Bush 2 era, Edgarian's story occupies the more recent past: the short-lived hope and change-charged moment of Obama's presidential victory. Edgarian's protagonists Lena Rusch and Charlie Pepper ( Note: Unlike Franzen's narrator, the wife here retains her "maiden" name) are a well-educated, once-optimistic couple who grew up believing the "having it all" script. Now severely challenged by the economic crash and a stillborn baby, change seems to be dashing hope. As Lena tells her childhood friend and now business-partner, Vi: "I know what you're going to say. This middle-aged thing. Did you see it coming? I didn't. Remember when I planned on being governor? Huh, Vi? Instead, I'm living a life that's good for my character. Am I supposed to say it's wonderful?"
"Three Stages of Amazement" is a playbook for contemporary readers who have learned firsthand that the rules of the game have suddenly and irrevocably changed, that the script we trusted needs rewriting but nobody's quite sure what the ending is going to be. Even the young president who ignited our hopes and passions for a better world is so battered by currents events he too seems adrift. As I said earlier the title doesn't do the book justice. Edgarian should have gone with a single word descriptor for her novel as Franzen did with "Freedom" What is called for in this age of the damaged American dream--and what Lena Rusch gracefully and courageously demonstrates in this must-read book- is "Resilience". Author Carol Edgarian delivers the truth and a much-needed clue on how to live. What is needed in these challenging times of earthquakes and wars, nuclear and family meltdowns, economic downturns and job losses is just that: resilience.
Posted by Caryl