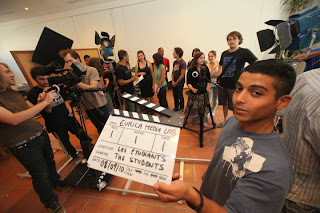 I helped a friend last week with an auction to raise money for the non-profit she runs.  In fact I’ve got another one to attend tonight organized by a woman from my entrepreneur group.  Last week’s event was for a cultural exchange program to help underprivileged young adults who have a passion for media in the USA and France.  My friend created Eurica Media Lab to foster global understanding and communication.  She started it after she was let go from her last corporate job and decided to combine her knowledge of media (she was a former film maker) with her familiarity of the French and American cultures (she has homes in both countries).


Tonight’s fund raiser supports the Partnership for Student Advancement.  It provides high school students in NYC with counseling, training, internships and a lot more to help them identify and pursue a career path.   My fellow entrepreneur left a corporate job too but was a teacher before that and guided her own five children through the city’s school system.  Her passion has always been to help minority students as inspired by her husband who did the same through his law practice.


Both these women don’t do this work for the money.   They aren’t currently taking any salary not to say they wouldn’t like to at some point.  Who wouldn’t in this economy.  They do it because it makes them feel good and allows them to combine their skills and knowledge and use them in a new direction to help fix a problem.  They studied up on all the particulars of starting a company, gathered a board of directors and started making contacts, in this case to ask for money.  I have great respect for both of them.


It’s interesting to note that both of them did not come from former especially lucrative professions.  You don’t have to be sitting on a pile of money to follow your own dream to create dreams for others.  Although I do have another friend who was the head of a large financial exchange and who’s now the chief of staff for the mayor of a good-sized city with a large low-income population.  She earns a single digit salary -- $1 a year -- at that job.  I admire her also.
Any ideas for a non-profit company of your own?
1)       Check out Eurica Media Lab
2)      And Partnership for Student Advancement
3)      Start learning how to start your own non-profit
Posted by Maryl